Born in Sweden, Nicola Hepp trained to be a dancer at the Schweizerische Ballettberufsschule (SBBS) in Zürich, Switzerland and Amsterdamse Hogeschool voor de Kunsten in the Netherlands. She graduated from the AHK Modern Dance Department in 1999, after having spent her last year as an exchange student at the School for New Dance Development (SNDO). While enrolled at the AHK, she worked with choreographers and teachers such as David Zambrano, Michael Schumacher, Katie Duck, Martinette (Pietje) Janmaat, Tom Koch, Eileen Standley and Cathie Caraker.

In 2006 she obtained her Master in Choreography and New Media at the Amsterdamse Hogeschool voor de Kunsten. During her postgraduate studies, she worked with Susan Rethorst, Scott deLahunta, Sher Doruff, Thomas Lehmen and Blast Theory.

Nicola received several scholarships to take part in workshops and further trainings, such as ‘Dance the Net’ with Kelli Dipple in Leeds, ‘Dance and Technology’ with the company Palindrome in Nürnberg, ‘Dance and the Camera’ with Erik van Zuylen and Impulstanz, Vienna (projects with Emio Greco I PC and Josef Nadj). She also took part in workshops by David Zambrano, Iñaki Azpillaga/Ultima Vez, Gabriel Castillo/DV8, Bruno Caverna and Magpie Company. More recently she followed the workshop Script writing and Movement research for Screendance with Bertha and Maite Bermudez at Cinedans Amsterdam.

A staff member of the Amsterdamse Hogeschool voor de Kunsten since 2002, she teaches release technique, improvisation, composition and contact improvisation. She has taught extensively as a guest teacher at several institutions and dance schools, such as AREA 59, Magpie Summer Course and New Dance Studios Amsterdam, Fontys Academy Tilburg, Dansstationen Malmö and Laster Studios Bruxelles. For an impression of her technique class click here

Nicola’s choreographies and screendance works have been shown in festivals and venues internationally and have won several awards and nominations. Her work often returns to the themes of aging, reminiscing, perception and the notion of a double. The juxtaposition of live, moving bodies with moving video images have played a major part in Nicola’s live performances and installations in the past. Since 2015 her main focus is on screendance and filmmaking. The choreography of the camera in relation to the dancers, actors or moving bodies, directing the eye of the spectator as well as finetuning the movements that are to be captured on screen is where her expertise in movement is at its best. Her extensive background and experience in dance, film and video allow her to fulfill several different roles within film and/or theatrical productions. She works as a choreographer, movement director, movement coach and filmmaker, alternating between creating her own projects and working under commission. 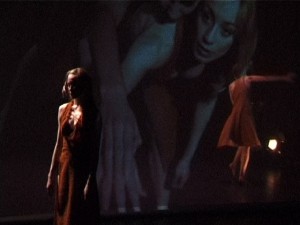